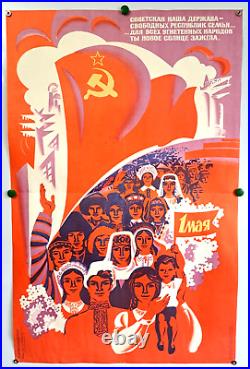 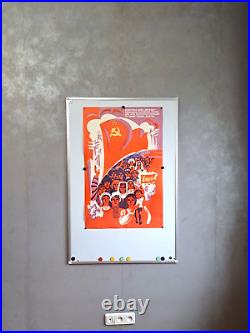 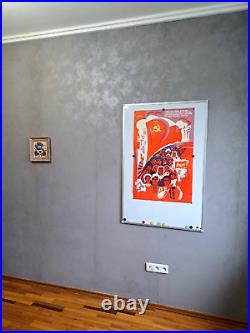 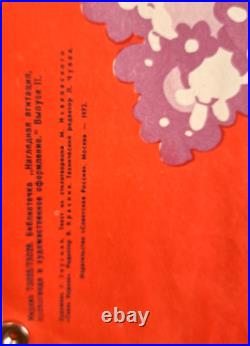 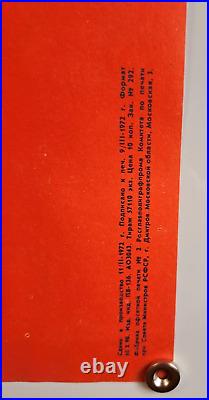 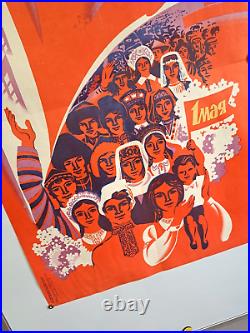 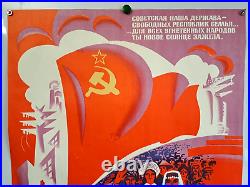 ORIGINAL SOVIET PROPAGANDA POSTER. Our Soviet state is a country of free Republics. SIZE – 90/60 CENTIMETERS OR 33 / 24 INCHES. ITS IN VERRY GOOD AND SAVED CONDITION. IF YOU HAVE ANY QUESTIONS OR NEED MORE INFOR. PERFECT FOR COLLECTION, PRESENT, DECORATION, USE. Soviet graphic artist, poster artist; author of numerous film posters and political posters. Member of the Union of Artists of the USSR. Vladimir Gavrilovich Kononov was born in 1924 in Perm. He studied at the Institute of Painting, Sculpture and Architecture named after I. Repin with teachers V. After graduating from IZhSA in 1955, he moved to Moscow. Kononov worked mainly in the genres of socio-political posters and film posters, performed a significant number of agricultural posters dedicated to grain growers. He worked in the creative and production workshop “Agitplakat” of the Union of Artists of the USSR. In the 1990s, in connection with the negative phenomena in the country and the decline of interest in the art of the poster, he began to actively engage in painting, painted still lifes and landscapes. Author of political and social posters: 5 million rubles. For 1960, the Karasev brigade undertakes to save “(1960), ” We will master 25 million hectares of new lands in the RSFSR! (1967), Five-Year Plan – a shock finish! There are a trillion kilowatt-hours a year! ” (all -1975), “We will come to the victory of communist labor! ” (1976), “Excellent quality housing for Soviet workers! ” (1976), “Bread for the Motherland! ” (1978), “Work for the people is happiness! ” (1978), “Glory to the farmers! ” (1979), “The Party is the immortality of our cause! ” (1980), “All our energy, knowledge, experience – to the implementation of the decisions of the XXVI Congress of the CPSU! ” (1981), “Decisions of the XXVI Congress of the CPSU will be implemented! ” (1981), “You listen to every trembling ear. Each ear has its own voice”, “Our road is true”, “60th anniversary of the formation of the USSR – 60 shock working weeks! ” (all -1982), “A decisive battle – for truants, spoilers, grabbers! ” (1983), “Lenin’s program of the party – a program of struggle for peace and communism” (1986), “Hello, the country of heroes, the country of dreamers, the country of scientists! “, “Let’s build sunny Leninist socialism on Soviet arable land! The earthly star of October has opened! “, “We are raising the banner, comrades, here! Come build a republic of labor with us! An outstanding master of poster art, he was awarded many prizes and medals at various competitions and exhibitions. Already in 1956, V. Kononov was awarded two diplomas of the 1st degree – at the All-Union Exhibition of Graphics and the First Film Poster Exhibition. In 1975, for his work on creating posters for Soviet films, he received the Diploma of the 1st degree of the Committee for Cinematography. In the same 1975 he received a Diploma for winning the “Best Poster of the Year” contest. In 1977, the artist was awarded the Diploma of the 1st degree of the All-Union competition “The Art of the Book”, in 1982 – a Diploma at the All-Union Poster Competition “Revolutionary keep step”. Circulation posters of V. Kononov are kept in the State Historical Museum (GIM), the State Central Museum of Contemporary History of Russia (GTSMSIR), the Russian State Library (RSL), the Central Museum of the Armed Forces of the Russian Federation (CMVS RF), the Altai State Museum of Local Lore (AGKM), the Voronezh Regional Museum of Local Lore, the Vologda Art Museum-Reserve, the Vyborg United Museum-Reserve, the State Museum of the History of St. Petersburg, the State Central Museum of Cinema (GTSMK), the State Public Library in St. Petersburg, the Stavropol State Museum reserve, the Museum-Reserve “Museum of the Defense of Sevastopol”, the Museum Center “Peace Square”, the Gelendzhik Museum of Local History (GIKM), the Nevyansk State Historical and Architectural Museum (NGIAM), PKM im. Zhuravlev, in many private Russian and foreign collections. This item is in the category “Art\Art Posters”. The seller is “originalfilm312″ and is located in this country: UA. This item can be shipped worldwide.