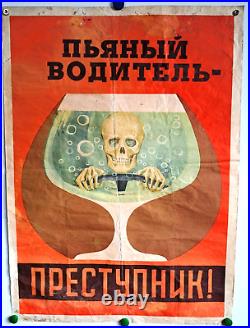 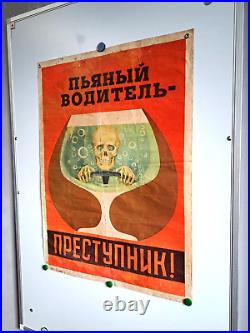 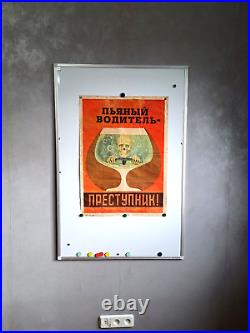 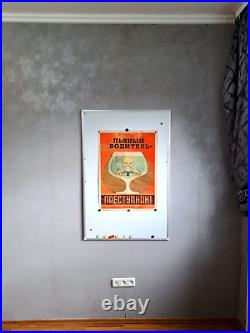 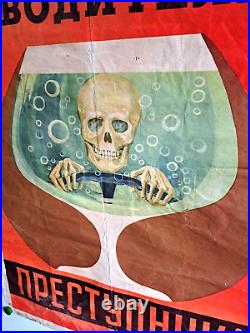 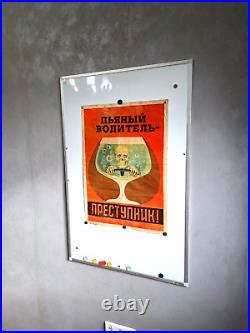 SIZE- 90/60 CENTIMETERS OR 36/ 24 INCHES. Drunk driver is criminal! ITS IN VERRY GOOD AND SAVED CONDITION. IF YOU HAVE ANY QUESTIONS OR NEED MORE INFOR. PERFECT FOR COLLECTION, PRESENT, DECORATION, USE. Bayrakov Nikolay Pavlovich 1938. Soviet graphic artist, illustrator, poster artist. Member of the Union of Artists of the USSR. Graduated from the Moscow State Art Institute named after V. Collaborated with the publishing house “Plakat”, worked in the field of political and social posters, performed a series of propaganda posters dedicated to the All-Union shock Komsomol construction projects. Nikolai Bayrakov is a participant in numerous republican, all-Union, Russian and foreign exhibitions; special poster contests. Awarded with diplomas and medals at poster competitions. Author of posters: My plant is my pride! ” (1975), “Many Traditions of the Stakhanov Movement! ” (1975), “Decisions of the XXVI Congress of the CPSU will be implemented! ” (1981), “Let the Siberian distance shine with the lights of new cities” (1981), “All paths are open to youth! ” (1982), “Give Komsomolsk-on-Amur! To shock construction sites of the agro-industrial complex! ” (1982), “Glorify the motherland with hard work! (1982), Boys and Girls! Let’s give our votes” (1982), “Elections to the Supreme Soviet of the USSR” (1983), “Our knowledge and creativity to the Motherland! ” (1983), “Boys and Girls! 135 shock Komsomol construction projects of the country are waiting for you! ” (1983), “Always be at the forefront, young guard of labor! ” (1983), “The result of your work is below in the common cause” (1984), “The result of your work is a contribution to the common cause” (1984), “Let our Motherland become stronger, richer! ” (1984), “Fifteen Republics – One Fatherland: Our Soviet Country” (1985), “The youth of the entire planet is with us! ” (1985), “We Need Peace! ” (1985), “XXVII Congress of the CPSU – shock work, initiative and creativity of the young! ” (1985), “Your contribution to acceleration (1986), By voting for the bloc of communists and non-party people, we are voting for the happiness of the Soviet people! ” (1987), “120 years since the birth of V. For the Leninist ideal of socialism! 1989, together with G. Shurshin; triptych “Moscow Festival of Youth” (1985). Circulation posters by N. Bayrakov are in the RSL, the Azov Historical, Archaeological and Paleontological Museum-Reserve, the Astrakhan Museum-Reserve, the Veliky Ustyug Historical, Architectural and Art Museum-Reserve (VUMZ), the State Historical Museum (SIM), the State Museum of the History of St. Petersburg, the State Central Museum of Contemporary History of Russia (GTsMSIR), the Veliky Ustyug State Museum-Reserve, the Volgograd Regional Museum of Local Lore (VOKM), the Voronezh Regional Museum of Local Lore, the Pyatigorsk Museum of Local Lore, the Saratov Regional Museum of Local Lore (SOMK), the Gelendzhik Historical – Museum of Local Lore (GIKM), Vyborg United Museum-Reserve, Surgut Museum of Local Lore, National Museum of the RME named after. Felitsyna, Murmansk Regional Museum of Local Lore (MOKM), Nevyansk State Historical and Architectural Museum (NGIAM), GKM im. Grodekov, the Surgut Museum of Local Lore (SKM), the Museum Center “Heritage of Chukotka”, the State Historical Museum of the Southern Urals (Chelyabinsk Regional Museum of Local Lore, CHOKM), the Central Museum of Taurida (WTC), private collections. This item is in the category “Art\Art Posters”. The seller is “originalfilm312″ and is located in this country: UA. This item can be shipped worldwide.