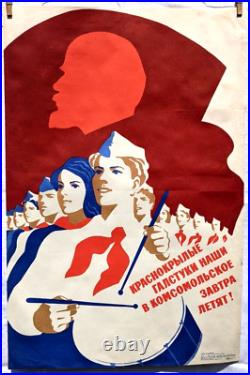 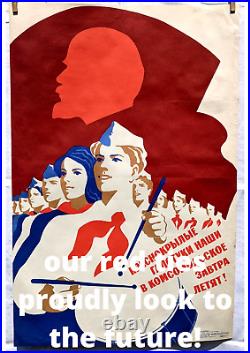 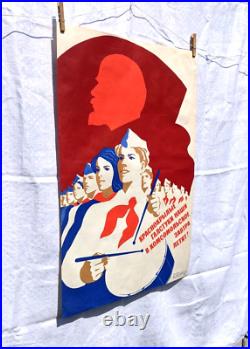 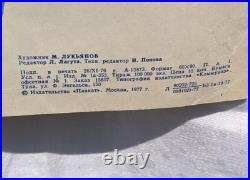 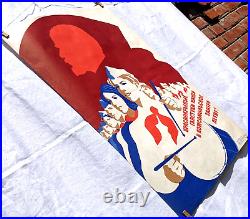 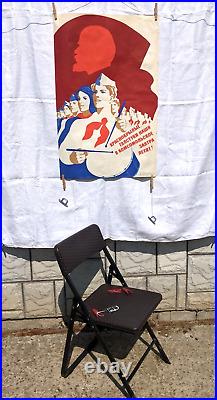 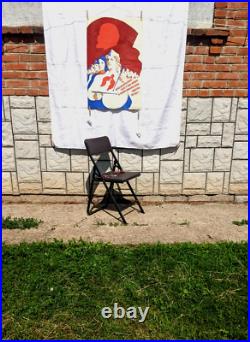 ORIGINAL SOVIET PROPAGANDA POSTER. In the middle of the Spring wound on the Amur and in Moscow, a red flag beats on a crane in the blue sky. ITS IN VERRY GOOD AND SAVED CONDITION. IF YOU HAVE ANY QUESTIONS OR NEED MORE INFOR. PERFECT FOR COLLECTION, PRESENT, DECORATION, USE. Kominarets (Komenarets) Igor Alexandrovich 1923. Soviet graphic artist, poster artist, illustrator. Member of the Union of Artists of the USSR. Known as the author of popular posters on socio-political and sports topics. He received his art education at the All-Union State Institute of Cinematography (VGIK). He showed himself most clearly in the poster genre, his works are distinguished by their original composition and invention, major coloring and perfection of technical execution. Starting quite traditionally in the early period of creativity, in the mid-1950s he developed a recognizable and unique poster style. Igor Kominarets is the author of a large number of propaganda social posters: Everyone for the elections to the Supreme Soviet of the USSR! ” (1954), “On December 12, we will choose judges and assessors worthy of the people’s trust! ” (1954), “Textile Workers! Your duty is to give the people a lot of beautiful fabrics of excellent quality! ” (1954), “Achievements of science – collective farm gardening! ” (1954), “Come with us! ” (1955), “Let’s build new power plants for the good of the Soviet people! ” (1955), “Meet our May Day with victories in labor! ” (1955), “More metal to the Motherland! ” (1955), “From underground may-days to a national holiday! ” (1955), “We strengthen friendship with work! ” (1956), “Glory to the winged heroes! ” (1956), “Meet our May Day with victories in labor! ” (1956), “Study well, love science and work! ” (1956), “Do exercises in the morning! ” (1956), “A Book to the Masses! ” (1956), “Worked well – had a good rest” (1956), “We strengthen friendship with work! ” (1956), “Let’s Have a Planting Time! ” (1956), “Glory to the Soviet people” (1957), “Your Motherland! Our work, our deeds, our plans! (1957), “Long live the union of workers and peasants – the basis of Soviet power” (1957), Defend and strengthen peace! ” (1958), “Our friendship is our strength! ” (1958), “For the power of the Soviets! 1958; together with S. He completed several works in collaboration with the artist Yevgeny Pozdnev Are you not like that? “, “May 1 is the day of solidarity of the working people of the whole world! , Both – 1957. Since the mid-1960s, Kominarets, like most Soviet poster artists, has abandoned narrative in his work on posters, changing his style in interpreting images, moving into minimalism and schematism. His works are simplified, lose their individuality and become indistinguishable from the works of other authors; as a rule, he performs political propaganda posters: Give me the highway of the century! ” (1975), “The cause of October is in good hands” (1975), “Glory to October! Decisions of the 25th Congress of the CPSU – in life! (1976), Happy holiday, dear women! ” (1976), “Let’s multiply the glory of the Komsomol through labor! ” (1977), “Personal five-year plan for the 110th anniversary of the birth of V. ” (1979), “Everyone for the holiday of shock labor! To the communist subbotnik – the highest productivity and excellent quality of work! ” (1979), “Warsaw Pact – in the service of peace and socialism! ” (1980), “Thrift is a communist trait” (1981), “Soviet trade unions are a school of communism” (1981), “We will fulfill the plans of our native party” (1981), “Take care of everything that was created by the working hands! ” (1982), “The strength of the team is in organization and discipline! ” (1983), “Work effectively and efficiently! Everyone to the communist subbotnik! ” (1984), “Let’s do the energy program! ” (1984), “For the sake of preserving peace, let us work with a vengeance! ” (1984), “On the day of the Lenin Subbotnik, work efficiently and efficiently! Kominarts are kept in the funds of the State Historical Museum (SIM), the Russian State Library (RSL), the Russian National Library (RNL), the State Museum of the History of St. Petersburg, the Vologda Art Museum-Reserve, the Vyborg United Museum-Reserve, the Kuzbass State Museum of Local Lore, Saratov Regional Museum of Local Lore (SOMK), Murom Museum of History and Art, Military History Museum of the Pacific Fleet, Orenburg Governor’s Museum of Local History, Perm State Art Gallery (PGHG), Rybinsk Museum-Reserve, Tver State United Museum (TGOM), the Gelendzhik Museum of Local History, the National Museum of the RME named after. Evseev, Cherepovets Museum Association, City Local History Museum of Komsomolsk-on-Amur, National Parliamentary Library of Georgia, in private collections in Moscow and London. SIZE – 90/60 CENTIMETERS OR 36 / 24 INCHES. This item is in the category “Art\Art Posters”. The seller is “originalfilm312″ and is located in this country: UA. This item can be shipped worldwide.