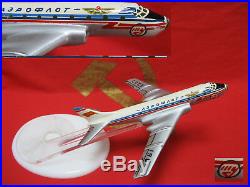 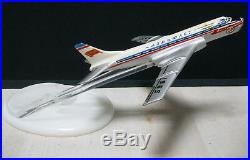 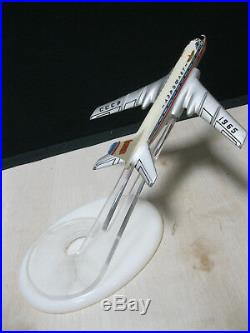 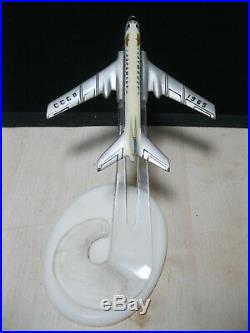 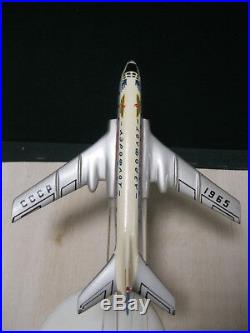 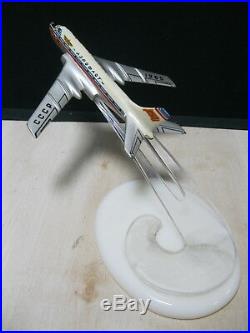 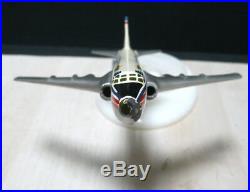 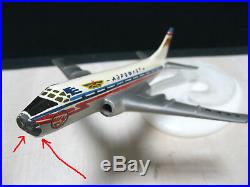 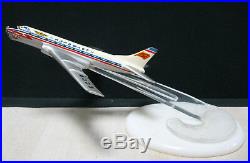 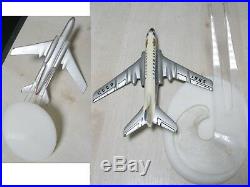 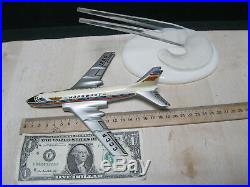 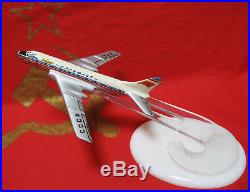 Original vintage Russian Soviet USSR Desk & Shelf metal Model. Airplane plane TU-104 AEROFLOT. Made in USSR – Soviet Union, 70s. The nose part of the plane on one side – the paint is damaged, but it looks grand! TU-134 (on the codification of NATO: Crusty – “Stranglethorn” or “Blue bird”). Soviet passenger airplane for 76-80 passengers for small and medium-sized airlines. Developed in the early 1960s in the OKB im. Serially from 1966 to 1984 at the Kharkov Aviation Production Association. The first flight was performed on July 29, 1963, in service since September 1967. One of the most massive passenger aircraft assembled in the Soviet Union. In total, along with the experimental and pre-series models. 854 aircraft of all modifications were built. All production was discontinued in 1989. Tu-104 was exported to the Warsaw Treaty countries. AEROFLOT – the country’s largest airline – Soviet Union. Headquarters – in Moscow. The date of foundation of civil aviation in the USSR is February 9, 1923. “Aeroflot” – a member of the International Air Transport Association (IATA). Base airport – Moscow Sheremetyevo Airport. Really a ultra rare item! Organic glass and metal. This model was made in the Soviet Union in 60-70s. It made the workers a secret military factory. For one of the generals of civil aviation. This factory produces the world famous. Strategic rockets Satan («SS-18″ Satan “). The length of the aircraft about 195 mm (7.67 inches). Base about 155 mm (6.10 inches) x 115 mm (4.52 inches). The model is made of metal alloy. Base – Organic glass, plastic. I’m always in contact, from 9 a. Except Saturday and Sunday. The item “Vintage model Airplane plane TU 104 AEROFLOT metal Soviet Union Russia USSR” is in sale since Sunday, March 24, 2019. This item is in the category “Collectibles\Transportation\Aviation\Airlines\Other Airline Collectibles”. The seller is “oliver.lv” and is located in Europe. This item can be shipped worldwide.