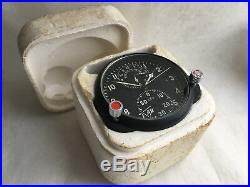 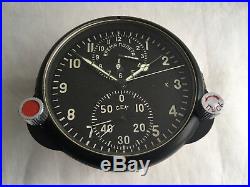 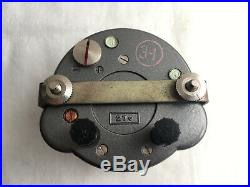 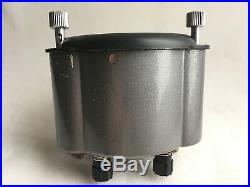 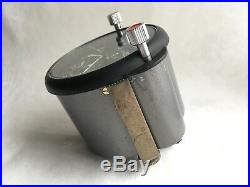 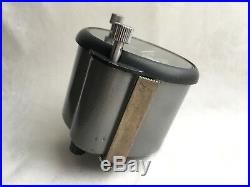 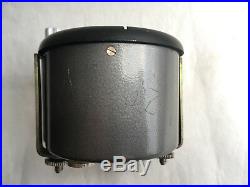 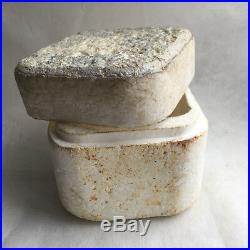 Dear customers, below you can find the description of the item. All the images in the listing are the actual photos. If you have any questions, please do not hesitate to ask. AChS-1 Russian USSR Military Air Force Cockpit Clock (75055 – serial number) Made in USSR. The clock is in a good working condition. Clock may display minor imperfections because of the age. To set the clock going, you just need to wind it up. The clock AChS-1 is designed for: showing the current time in hours, minutes and seconds; indication of the time of flight in hours and minutes; indication of small periods of time in minutes and seconds; Main technical data The duration of the clock service from one full winding up is 3 days. The frequency of the winding up is one time per 2 days. The clock weight – about 655 gram / 0.655 kg. Overall dimension of the clock: 85 x 91.4 x 91.4 mm. Description and operation Clock consists of an engine, a current time mechanism, a stopwatch mechanism, a time of flight mechanism, a movement mechanism and a regulator. Note: the clock engine are winding springs placed in cylinders. The mechanism of the current time works on the engine and operates continuously. Mechanisms of the flight time and the stopwatch mechanism work on the mechanism of the current time and can be switched “on” and “off” independently of each other. There is the dial with three scales for taking the readings of time: The large scale is to clock the time in hours, minutes and seconds. The ” “/”Flight time” scale is for timing flight in hours and minutes. The /”Stopwatch” scale is for counting the time of stopwatch work in minutes and seconds. The control of the clock is executed by two clock-heads: The Left (clockwork) head of the red color is used for: winding up, changing the time, start, stop, and return hands of the mechanism of flight time in the initial position. The winding up is executed by turning the left clockwork head counter-clockwise. Note: This head does not have the reverse rotation. You could move the clock-hands by pulling the head up to the stop and turning it counter-clockwise. The mechanism of the flight time starts by pressing on the head until it clicks and it stops by the second pressing on the head. Returning clock-hands of the mechanism of flight time in the initial position is implemented by the third pressing the left head. The right clock-head (with the arrow pointer) is used to start and stop the clock, and also to start, stop, and return to initial position stopwatch hands. The clock starts and stops by turning the head clockwise or counter-clockwise. Start, stop and return of the stopwatch hands to its initial position is possible by consecutive pressing the head. “Any defects which are not mentioned, but visible in the photos will be considered as described”. View more great items. The item “AChS 1 (K) USSR Russian Military Air Force Cockpit Clock” is in sale since Sunday, March 31, 2019. This item is in the category “Collectibles\Militaria\Militaria (Date Unknown)\Air Force”. The seller is “vintage_inspirited” and is located in Kharkov. This item can be shipped worldwide.