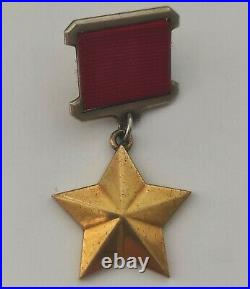 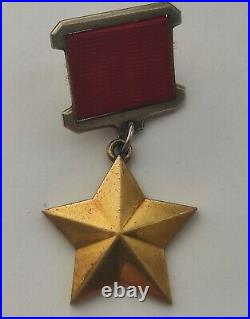 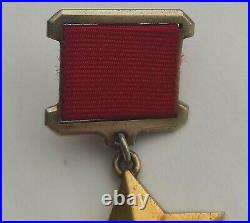 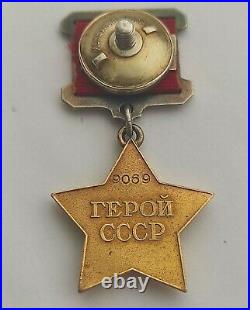 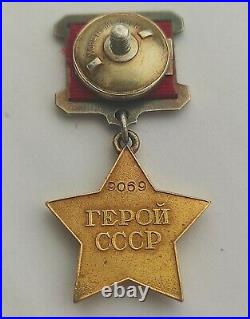 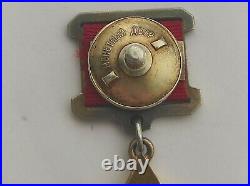 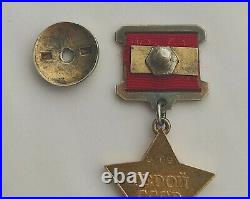 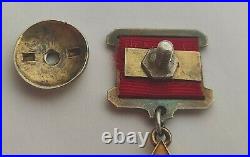 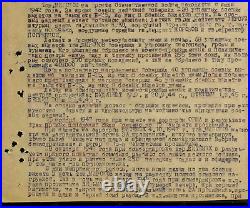 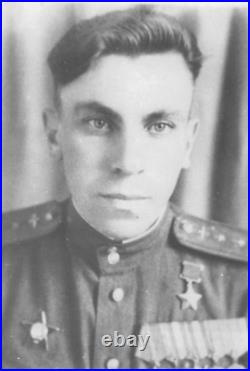 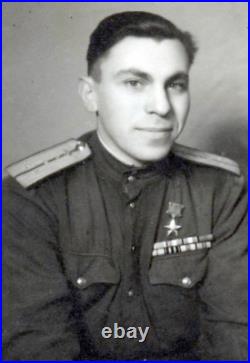 Good day to all. For those who are really interested I will send additional photos. Priority sales in Ukraine, you can meet in person in Kiev by prior arrangement. Medal “Gold Star” Title of Hero of the Soviet Union. The title of Hero of the Soviet Union (GSS) is the highest degree of distinction and is awarded for personal or collective services to the Soviet state and society associated with the accomplishment of a heroic deed. The Hero of the Soviet Union was awarded a badge of special distinction – the Gold Star medal. The medal is made of 950 gold. The medal pad is made of silver. Mironov Alexey Nikolaevich – deputy squadron commander of the 250th Guards Bomber Aviation Regiment of the 14th Guards Red Banner Bryansk-Berlin Bomber Division of the 4th Guards Gomel Bomber Aviation Corps of the 18th Air Army, guard captain. Born on March 12, 1919 in the city of Nizhneudinsk, Irkutsk province, now the Irkutsk region. From the family of a railroad worker. As a child, he moved with his family to the city of Taiga (now the Kemerovo region), where he graduated from 8 classes. From 1936 he worked as an operator of the repair service of the Taiginsky branch of the Tomsk railway. Was drafted into the ranks of the Red Army in September 1938. He served as a Red Army soldier in a rifle regiment. In 1939, at a personal request, he was enrolled in aviation and sent to study at the Novosibirsk Military Aviation School. In 1940 he graduated from it and was sent to the 2nd Higher Aviation Navigation School in the city of Ivanovo (in the fall of 1941 he was evacuated to the city of Mary, Turkmen SSR). He mastered the R-5, SB, Pe-2, U-2 aircraft. Junior Lieutenant Mironov was sent to the front of the Great Patriotic War after leaving school in July 1942. The combat path began as a pilot of the 37th Long-Range Aviation Regiment in March 1943, the regiment received the rank of Guards and became known. As part of the 13th Guards Long-Range Aviation Regiment. Fought in the crew of the future Hero of the Soviet Union M. Throughout the war, he flew B-25 Mitchell bombers, which came from the United States under Lend-Lease. In March 1944, he was transferred to the forming 335th Long Range Aviation Regiment, in which he fought until the end of the war. In December 1944, the regiment was reorganized into the 250th Guards Bomber Aviation Regiment. Member of the CPSU (b) since 1943. He successfully carried out raids on enemy railway junctions and airfields, including in his deep rear. In November 1942, while bombing an airfield near the city of Orsha, with strong anti-aircraft artillery resistance, he made three approaches to the target at a minimum height, created three fires with well-dropped bombs. According to photo control, in this combat mission, 10 enemy aircraft destroyed on the ground were recorded on Mironov’s account. In January 1943, during a raid on the Vyazemsky railway junction, he destroyed three enemy echelons, one of them with manpower, up to 200 enemies were killed. During the bombing of an airfield near Vitebsk in October 1942, in one combat mission, he blew up a gas storage and a hangar with a direct hit. According to the data of the partisans received later, 15 aircraft were destroyed in this hangar. Two weeks later, on the basis of intelligence data, the location of the hostel of the German pilots in Vitebsk was revealed. Having received the order to destroy it, Mironov at night with strong anti-aircraft fire from the enemy found this building among the darkened city and destroyed it with direct hits from aerial bombs. More than 250 enemy pilots and ground personnel were killed and wounded. The deputy squadron commander of the 250th Guards Bomber Aviation Regiment of the 14th Guards Bomber Aviation Division of the 4th Guards Bomber Aviation Corps of the 18th Guards Air Army, Captain Mironov, by May 1945, completed 238 sorties to bombard military targets and groups deep behind enemy lines… His troops, including 68 in adverse weather conditions. These aircraft dropped 395 tons of aerial bombs, and a direct hit struck 370 objects. Mironov’s total combat flight was 1260 hours, of which 850 hours at night. In frontline conditions, he trained nine pilots for the positions of crew commanders. For the exemplary performance of combat missions of the command on the front of the fight against German fascism and the courage and heroism shown at the same time, by the Decree of the Presidium of the Supreme Soviet of the USSR of August 18, 1945, Captain Alexei Nikolaevich Mironov was awarded the title of Hero of the Soviet Union with the award of the Order of Lenin and the Gold Star medal No. After the war he continued to serve in the Air Force. In July 1953, Major A. Mironov was transferred to the reserve. Lived and worked in the town of Bolotnoye, Novosibirsk region. He died on December 19, 1969. Buried in the town of Bolotnoye. He was awarded the Order of Lenin (08/18/1945), two Orders of the Red Banner (09/07/1943; 06/07/1944), the Order of the Red Star (03/06/1943), medals. In Novosibirsk, his name is immortalized on the Alley of Heroes at the Monument. Thank you for stopping by my store! I value your feedback and opinion. If you have any kind of question, please do not hesitate to reach me out. Besides, I always have special discounts for my buyers, just get in touch and we can discuss your conditions. Thank you once again. The item “Medal Gold Star Hero of the Soviet Union” is in sale since Sunday, November 15, 2020. This item is in the category “Collectibles\Militaria\WW II (1939-45)\Original Period Items\Russia\Medals, Pins & Ribbons”. The seller is “vovvorobe_4″ and is located in Ingylec. This item can be shipped worldwide.