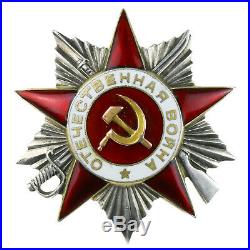 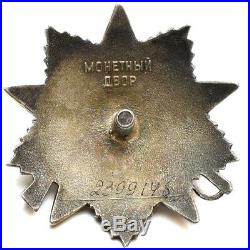 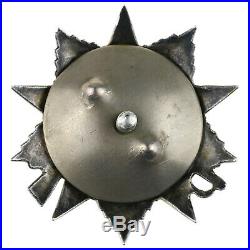 Genuine 100% original Order made from Silver and used in The Soviet Union Army, since 1942. This USSR order is used, with normal marks of wearing. Awards may be different than you see in the photo but in good condition. Mostly, serial numbers starting from 500 000. The Order of the Patriotic War was awarded to all soldiers in the Soviet armed forces, security troops, and to partisans for heroic deeds during the Great Patriotic War. In 1985 during the celebration of the 40th anniversary of the Great Patriotic War, it was decided that all surviving veterans of the war would be awarded either 2nd or 1st class of the Order. It featured a red enamel five-pointed star, made of silver, with straight rays in the background, and crossed saber and a Mosin rifle. United States, Canada, Australia: 21-30 days. Asia, South America: 30-45 days. Most of transit countries do not provide tracking information. We can see the same tracking information which you can see. Please do not try to repair because you need to return the item in the same condition in which you got it from us. Please check our other listings. The item “ORIGINAL SOVIET UNION SILVER MILITARY ORDER OF THE PATRIOTIC WAR WW2 AWARD BADGE” is in sale since Monday, June 10, 2019. This item is in the category “Collectibles\Militaria\WW II (1939-45)\Original Period Items\Russia\Medals, Pins & Ribbons”. The seller is “kingofhobbies” and is located in Klaipda. This item can be shipped worldwide.