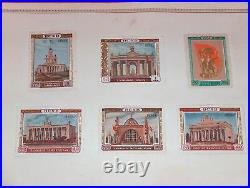 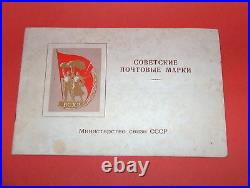 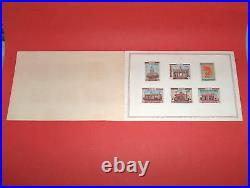 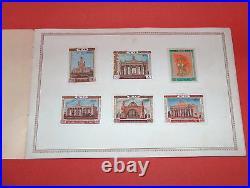 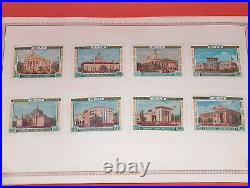 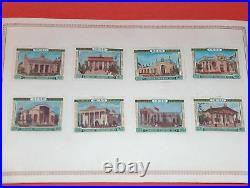 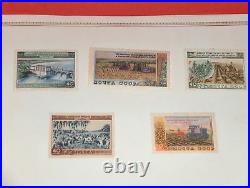 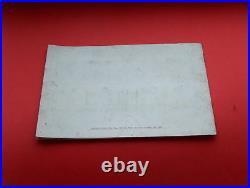 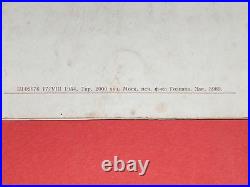 RARE SOVIET POSTAL STAMPS ALBUM, VSKhV, RUSSIA, 1954. ALBUM CONTANS 27 POSTAL STAMPS. IT IS IN GOOD CONDITION, SOILED OUTSIDE + SOME SPOTS INSIDE, THERE IS SOME DARKENING OF THE PAPER TOO. POSTAL STAMPS ARE GLUED TO THE PAGES OF ALBUM. IT’S LIMITED EDITION – THIS ALBUM HAD A PRINTING OF 2000 COPIES ONLY. LENGTH OF ALBUM – 22 CM; BREADTH – 15 CM. VSKhV exhibition was established February 17, 1935 as the All-Union Agricultural Exhibition (VSKhV) Russian:?????????? An existing site (then known as Ostankino Park, a country territory recently incorporated into the city limits), was approved in August, 1935. The master plan by Vyacheslav Oltarzhevsky was approved in April, 1936, and the first show season was announced to begin in July, 1937. In October, 1948 the State ordered to renew the Exhibition, starting with the 1950 season. Again, the opening was postponed more than once; the first post-war season opened in 1954 (still as Agricultural exhibition). In 1956 season the planners set aside an Industrial area within the main territory; more restructuring and rebuilding followed. In 1959 the park was renamed Exhibition of Achievements of the National Economy Russian:???????? Vystavka Dostizheniy Narodnovo Khozyaystva or???? This item is in the category “Stamps\Europe\Russia & Soviet Union”. The seller is “noritsadan” and is located in this country: BG. This item can be shipped worldwide.