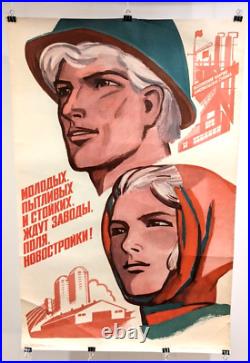 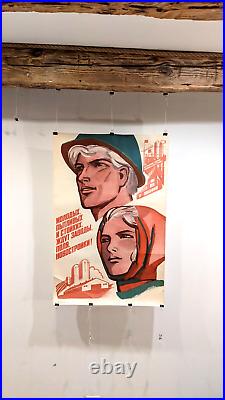 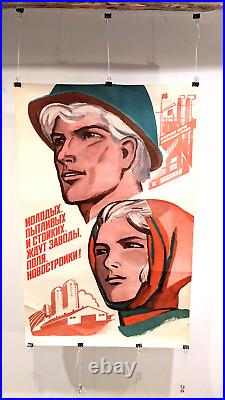 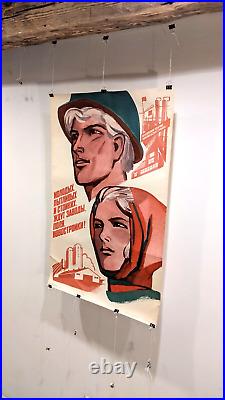 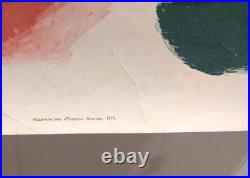 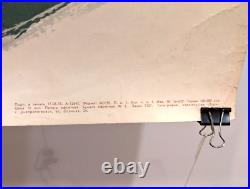 ORIGINAL COLD WAR PROPAGANDA POSTER. Young, loopy and persistent – waiting for factories, fields and new buildings! ITS IN VERRY GOOD AND SAVED CONDITION. IF YOU HAVE ANY QUESTIONS OR NEED MORE INFOR. PERFECT FOR COLLECTION, PRESENT, DECORATION, USE. Graphic artist, painter, poster artist. Member of the Union of Artists of the USSR. Nikolai Petrovich Charukhin was born in Leningrad, graduated from secondary art school (1955). Since 1959 he lived in Moscow. He is best known for his colorful posters. He performed social and political posters and safety posters some were made jointly with V. In the 1990s he was mainly engaged in painting. He painted in a free manner bright large-format fantasy paintings, portraits and architectural landscapes. The main poster works: The mask is torn off! ” (1960), “May there always be sunshine! ” (1961), “Distant worlds await us” (1962), “Happy New Year, guys! ” (1965), “We are a reliable shield of the Fatherland, our sky will be clear! ” (1966), “There is a friendly family in our house” (1967), “Stop the killers! ” (1968), “In the struggle against imperialism, for national independence! ” (1968), “We won’t allow it! “, “Racism is a disgrace to America! “, “We are building the foundations of a new industry! ” (all -1969), “Let’s work to bring communism closer! ” (1970), “The Five-Year Plan is the link between science and production! “, “The Five-Year Plan is rivers of steel! “, “The Five-Year Plan is a sea of?? Oil”, “The Five-Year Plan is the quality of machines”, “We will complete the Five-Year Plan tasks! ” (all -1971), “More good and different goods”, “We are building sunny cities! “, “The working class brings the ideals of Marxism-Leninism to the earth! “, “His Majesty the working class! ” (all -1973), “Look up to the leaders of the socialist competition! ” (1974), “We should be masters on earth. To love nature – to love the Motherland! (1974), Faster, Better, Cheaper! ” (1975), “We are ours, we will build a new world”, “We will fulfill the Party’s plans! “, “Forward, five-year plan, time, forward! ” (all -1976), “Five-year plan – ahead of schedule! ” (1978), “Where there is oil and ore, there will be cities” (1978), “The riches of Siberia – to the people! ” (1983), “Merge my shock work into the power of my native country! ” (1983); a series of posters dedicated to the Soviet police – “Prove fidelity to duty with deeds! “, “Safety of passengers and safety of cargo is our contribution to the nationwide cause”, “We will justify the trust of the party of the people with deeds”, “70 years of the Soviet police. At all stages of its glorious history, the Soviet militia faithfully serves its people”, “Our duty is to save nature for posterity! “, “Criminal investigation is the front line in the fight against crime”, “Let’s put an end to drunkenness forever! Charukhin’s posters are in the State Museum of Political History of Russia, the State Museum and Exhibition Center “ROSIZO”, the Memorial Museum of Cosmonautics (MMK), the Vologda State Historical, Architectural and Art Museum-Reserve, the Dmitrovsky Kremlin Museum-Reserve, the State Museum of the History of St. Petersburg, the Saratov Regional Museum of Local Lore, the Serpukhov Museum of History and Art, the Stavropol State Museum-Reserve, the Kuzbass State Museum of Local Lore, the Gelendzhik Museum of Local History (GIKM), the Ostrogozhsk Museum of History and Art. Kramskoy OIHM named after I. Kramskoy, the Nevyansk State Historical and Architectural Museum (NGIAM), the National Museum of the RME named after. Evseev, the Tver State United Museum (TGOM), the State Museum of the History of Russian Literature named after V. Dahl (State Literary Museum), the State Historical Museum of the South Urals, the Ulyanovsk Regional Museum of Local Lore named after I. SIZE – 70/90 CENTIMETERS OR 28 / 36 INCHES. This item is in the category “Art\Art Posters”. The seller is “originalfilm312″ and is located in this country: UA. This item can be shipped worldwide.