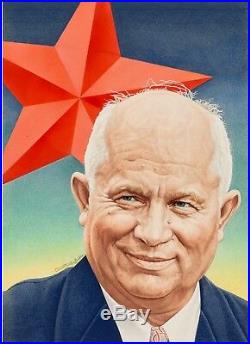 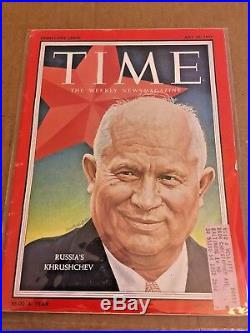 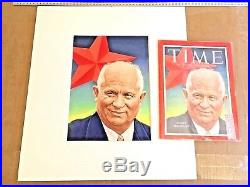 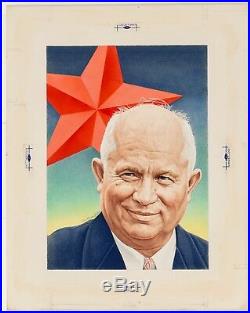 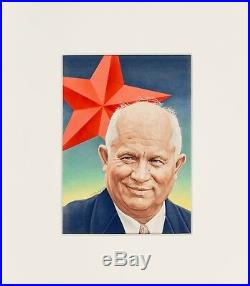 Original artwork to the July 22, 1957 Time Magazine cover featuring Nikita Khrushchev. This was the second of seven instances Khrushchev was printed on the cover of Time Magazine between 1956 and 1962. It was by far the most flattering depiction of Khrushchev, looking more the part of trickster than mortal foe; a prankster uncle, and not the ruler of an evil empire threatening the world with nuclear annihilation. Perhaps this depiction was largely in part to the hope at the time that Khrushchev’s “deStalinization” of the Soviet Union would usher in an era of peace. But the Vietnam War and Cuban Missile Crisis, among other events, dashed such dreams in the ensuing years. Indeed, Time Magazine was less kind in later covers, going so far as placing an image of Khrushchev standing menacingly in front of a nuclear mushroom cloud on the cover of a 1961 issue. This cover art has great historical importance, as Time Magazine not only reported the news, it directed public opinion. Back in the 1950s, Time Magazine was far more relevant than it is today. A few months after this issue was released, Khrushchev yet again graced the cover of Time Magazine, but this time as Man of the Year. The cover art to that issue reposes in the Smithsonian Institute in Washington DC. Truly, this is a piece that belongs in a museum as well. Painting is 16 1/4″ x 12 7/8″ with an image area of 12″ x 8 5/8″: a touch larger than the magazine itself. It is matted to 19″ x 17″. Copy of magazine included. The item “1957 Time Magazine COVER ART Nikita Khrushchev Cold War Baker USSR Soviet Union” is in sale since Thursday, July 19, 2018. This item is in the category “Books\Magazines”. The seller is “benkin” and is located in Staten Island, New York. This item can be shipped worldwide.