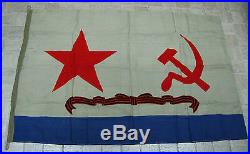 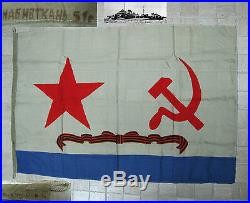 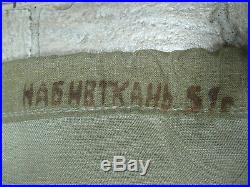 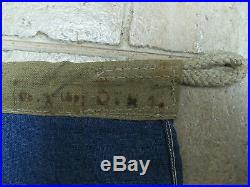 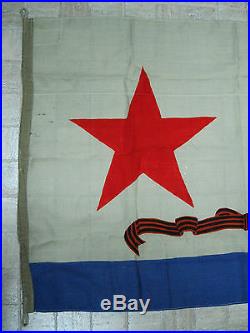 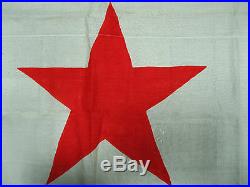 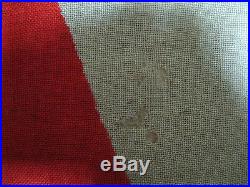 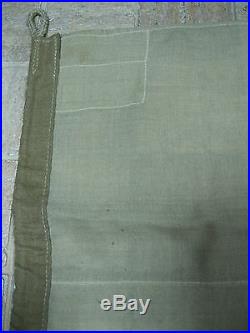 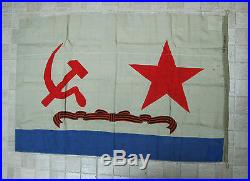 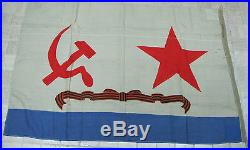 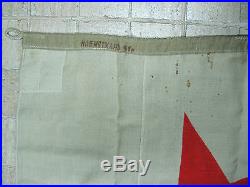 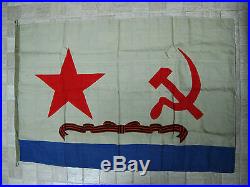 Original Soviet Russian Vintage BIG FLAG. These flags are replaced by after every long voyage – flags spoil the salt water. Therefore, very few originals in good condition came to our times. This Guard flag with legendary destroyer Gremyashchy. Such a flag is now only at the Museum of the Northern Fleet. Gremyashchy – Soviet destroyer project 7. The most famous destroyer in the series, awarded the title of “Guards”. Founded July 23, 1936 at the factory number 190 in Leningrad, was launched on August 12, 1937, put into operation 28 August 1939, in September went to the White Sea-Baltic Canal to the north, November 8, 1939 arrived in the Polar and was included in the the Northern Fleet. Dismissed from the Navy in 1958. The original flag Naval Fleet of the Soviet Union (there are holes – see the actual photo). Cloth, about 97 cm (38.18 inches) by 147 cm (57.87 inches). To my an antique store. This flag is brought widow officer of the Northern Fleet of the USSR. Officer served on one of the ships destroyers “Gremyashchy” in Last century. There is a stamp – 1951. Officer of the Northern Naval Fleet of the Soviet Union was demobilized in 1954. The flag is stored as a the family relic 61 years. Rarity on all post-Soviet territories! Made in Soviet Union (USSR) in 50s, Last Century. I’m always in contact, from 9 a. Except Saturday and Sunday. The item “BIG FLAG Legendary destroyer Gremyashchy 1951 Naval Fleet Soviet Union USSR” is in sale since Saturday, March 23, 2019. This item is in the category “Collectibles\Historical Memorabilia\Political\Rest of the World\Russia”. The seller is “oliver.lv” and is located in Europe. This item can be shipped worldwide.